The first place we thought we could get some serious sun was on Coluombia's eastern Caribbean coast in Taganga, historically a little fishing village but now a slightly gringofied, well known spot on the backpacker trail. 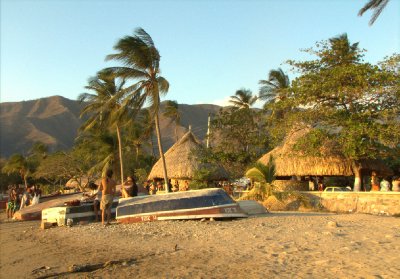 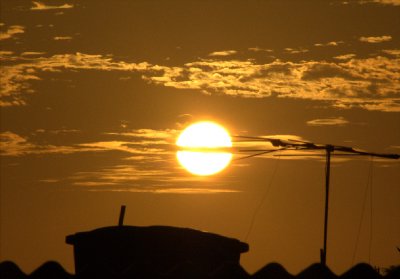 Based only on appearances the place is a little grubby but beneath the slightly dingy exterior it was actually a pretty good place to spend a couple of days. We had a nice play to stay by backpacker standards, more a B&B than a hostel and although we headed to the local beach for one afternoon, our first couple of days mainly consisted of pool relaxation, Jess and I locked in a serious tanning battle. On that note, the one trip to the beach did result in some amusement when a local family asked for a photo with Jess, the whitest person they had ever seen.

Although the Caribbean sun was excellent, at some point I managed to scratch my eye, requiring a trip to the local Ophthalmologist, a Caribbean pirate style eye patch and antibiotic eye drops. The unexpected ocular injury derailed our plan to head to National Park Tyrona to camp for a couple of days and instead we stayed a little longer in Taganga until the eye came right and took a day trip into Tyrona.

The scenery in the park was amazing, huge long wide stretches of beach, lined with coconut trees and littered with rocks which looked like pebbles but on a giant scale. The walking tracks take you down the coast and in each bay there are a number of places to stay, from a basic hammock to flashier cabanas. In one place you can hire a hammock right out on a rocky head land on top of the water. 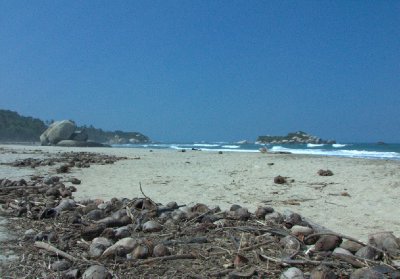 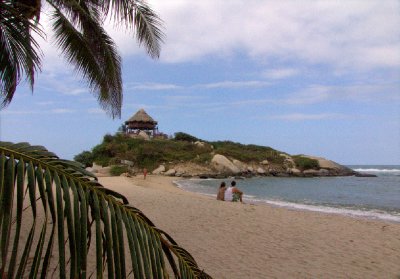 Visiting for a day was good and gave us a a nice overview but to do the park justice you would really want to stay in one of the hammocks or cabanas by the beach, kick back and do absolutely nothing for at least a full day – that would have been absolutely amazing but my eye wasn't co-operating.

Our next stop was Cartagena, an amazing historical city that conjures classic images of Caribbean colonialism, square riggers, walled ports, cannons, pirates, treasure, plunder and booty. It is Colombia's premier tourist attraction and our final destination in South America. 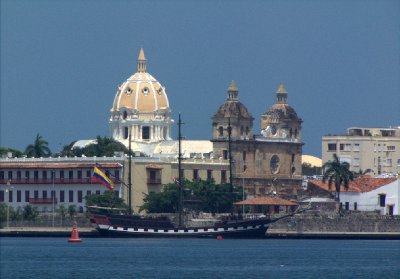 Surprisingly there is no road connecting South and Central America and unless you want to bash your way through the jungle on foot you need to fly or take a boat. Flying is expensive and for not that much more you can buy passage on one of the private yachts that ply the waters between Colombia and Panama.

Organising the boat was hassle free and on arrival in Cartagena we secured a double cabin on a boat departing in three days time. Finding decent, reasonably priced accommodation in Cartagena proved more difficult and we spent the first night in a terrible cockroach infested dive. The next morning, to avoid electrocuting ourselves on the exposed wiring of our “hotel” we decided to bite the bullet and move to a more expensive and much nicer place just down the road.

The old centre of Cartagena was by far and away the best example of restored colonial architecture we have seen in South America. A constant target of pirates such as Sir Francis Drake the Spanish developed into what was hoped to be an impregnable fort, through the construction of thick city walls that still surround the city today. Inside the walls, the buildings are amazing, every street is beautifully restored and colourful flowers creep over the balconies. Apart from encountering the occasional American tour group you really felt that you were stepping back in a time and despite being touristy it was no where near as garish as Salvador or Cusco. At night you could even hire horses and carts to take you on a romantic journey around the city. 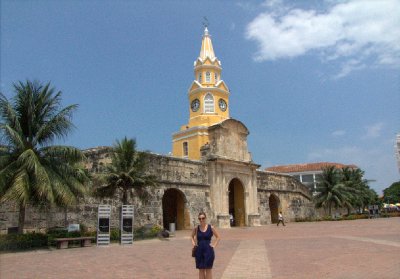 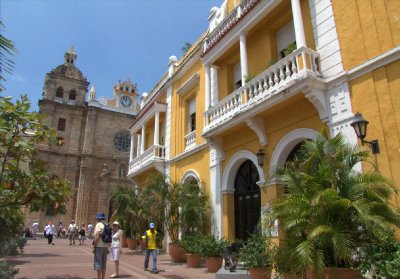 We spent our time there strolling the streets, exploring the old buildings, watching the sunset at Cafe del Mar and eating some amazing set lunches at rock bottom prices and looking wistfully at souvenirs we would love to buy but can't be bothered carrying for another couple of months.

The couple of days we had there passed in a flash and before we knew it we were boarding our boat to Central America, more than halfway through our trip.

Posted by mwalmsle 11:18 Archived in Colombia

Previous Next Table of contents

I hope you guys got your tan!

This blog requires you to be a logged in member of Travellerspoint to place comments.

If you aren't a member of Travellerspoint yet, you can join for free.